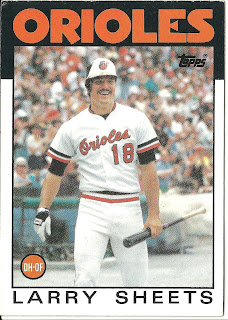 Card thoughts: I believe Sheets is laughing at a streaker, or some drunken fan who charged the field. Or he's amused by Earl Weaver arguing with the umpire. This is Sheets' rookie card, and it's a shame that Topps for an inexplicable reason stopped putting the all-star rookie trophy on the card, because this would have had one.

The player: Sheets was a player with a world of talent, but it took some convincing for him to apply it. He spent his first three pro seasons in rookie ball, not because he didn't hit well enough to advance, but because he couldn't decide if he wanted to continue playing. He even retired for the '81 season, to go back to college. Sheets decided to come back and in 1983 he tied future Astros first baseman Glenn Davis for the Southern League lead in home runs. He was in the big leagues to stay by 1985, although unlike most young players, he hardly ever played in the field. Sheets hit 17 home runs and had a .442 slugging percentage as a rookie. He had a similar season in 1986, but in 1987, one of the years home runs overall jumped, he had a career year. Sheets hit 31 home runs, drove in 94, and had a .314 average (9th in the league) and a .563 slugging percentage (good for 6th). He even played as a regular in the outfield for the first time in his career. His batting average dropped a 100 points and his slugging percentage dropped 200 the next season, and he only hit 10 home runs. His home run total further dropped to 7 in 1989.

Sheets was sent to the Tigers in 1990 for well-traveled 4A infielder Mike Brumley. He had a normal year for him, hitting 10 home runs and driving in 52. Frustrated at not being replicate his one stellar season, Sheets tried his luck in Japan for a year, before returning to be signed by the Angels (then released before ever playing a game), the Brewers (where he drove in 98 with their AAA team), and finally the Mariners, where he managed get 17 at bats in 1993, hitting .118.

Sheets currently runs the Larry Sheets Players Family Amusement Center, where you are invited to make some memories by running around like maniac screaming your head off while playing mini glo golf, laser tag, or bumper cars. 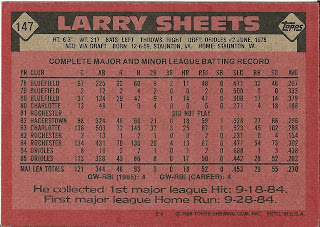 Rear guard: Sheets was hitting .455 after his home run; he would end the season with .438 average. The homer came off Red Sox pitcher Rich Gale and drove in Jim Traber. Sheets played right field that day. Also, the "DID NOT PLAY" line was always mysterious. It never gave a reason. I always thought the player had been suspended, or had gotten in trouble with the law.
Posted by Jets Break Jaws at 7:13 PM