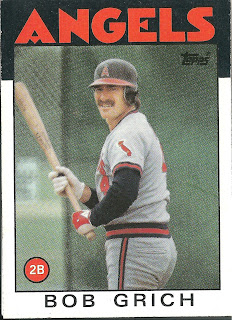 Card thoughts: Grich is one of those few players who often smiled on their cards (see here, here, and here). There's a tendency for players to use their game face when photographed. Also, it's unusual that Topps would not call him Bobby Grich, like everyone did when he played. My theory as they took the name off the Orioles media guide way back before anyone knew of him, and that was the name they stuck with over the years.

The player: Bobby Grich was an underrated player who was one of the best second baseman, both defensively and offensively, in the 1970s. A first round pick of the Orioles, despite good numbers in the minors (he won the MVP award at two levels), Grich was blocked by Davey Johnson and Mark Belanger in the majors. After playing only a handful of games in 1970 and 1971, he made the all-star team as a reserve shortstop in his rookie year, hitting 12 home runs and 50 RBIs. The next year, Davey Johnson was traded, and Grich was entrenched as the Orioles starting second baseman until 1976. Grich would win a gold glove every year for the rest of his Orioles career, and made the all star team again in 1974 and 1976. He won these gold gloves, despite often being in the top ten in errors; Grich was unmatched when it came to turning the double play and his range. But, in an anomaly, Grich managed to have a record .995 fielding percentage in 1973 (he would break this record in 1984).
Grich was part of the first free agent class and signed with the Angels in 1977 for a big sum of money, where he would remain for the rest of his career, making three more all star teams. His first couple seasons didn’t go so well. Grich made it into only 52 games the first year because of a back injury, and the next, his power seemingly had deserted him. But Grich would come back with a career year in 1978. He hit 30 home runs, drove 104, and hit .294. This was good enough for being in the top 10 in MVP voting. While he would never match these totals again, he might have had the strike shortened 1981 season been 162 games. As it is, he tied for the lead in home runs with 22 and led in slugging percentage with .543.
By the time this card was issued, Grich was fading. Although still a reliable fielder, he had lost a step, and his averages hovered in the .250 range. He retired in tears in the locker room after the Angels lost to the Red Sox in the playoffs the next year. Grich had played in the post season before, but never the World Series, and this was second time he’d only been a game away with the Angels and not made it. Grich had never hit well in the playoffs (lifetime average: .182), and this series was no exception. However, his two run home run in Game 5 put the Angels in the lead in what would have been the clinching game, had Dave Henderson not hit his home run.
In his retirement, Grich putters around the golf course and has worked in the front office for some indy ball teams. 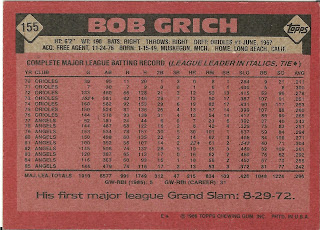 Great post. I think Grich reputation suffered somehwat 'cos of the perception that he never lived up to the hype with the Angels. He was a great 2B-man and is now getting his due with the understanding of OBP and sabermetrics. If he could have done stayed healthy he would have certainly been a HOF'er