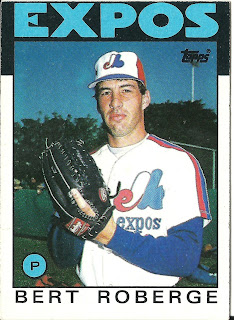 Card thoughts: I was waiting for this card to appear. One of my favorites in the set. I mentioned before I was particularly enamored with the “glowing” Expos cards, like #131 Razor Shines. Roberge on this card is almost phosphorescent. The other thing is the name. I think I would pronounce it as “row-bear-gee,” but I still have no clue if that’s how it is pronounced. You just don’t see a lot of people of French-Canadian descent playing major league ball these days, although it’s appropriate it is an Expos card.

The player: Roberge was part of the first generation of players that, in the wake of Bruce Sutter’s success as a short reliever, were used in that role for their entire careers, even in the minors. Roberge even featured Sutter’s split finger fastball as his out pitch, which was good because his fastball wasn’t all that great. He initially showed a lot of promise when he came up with the Astros in 1979. He was a perfect 3-0 with a 1.69 in 26 relief appearances, although a warning flag was his 17 to 13 walk to strikeout ratio. The next year, Roberge was ineffective with a 5.92 ERA. After being down in the minors all of 1981, he reappeared in the majors in 1982, but found it hard to crack the Astros notoriously effective bullpen. Roberge only managed to get into 22 games that season. He had a reprieve when he was finally released by the Astros in 1983 and was signed by the White Sox. Roberge appeared in 21 games with them and sported a fine 3.76 ERA, the best since his rookie year.
The Expos liked what they saw and traded for him and the season shown on this card would be the only one he spent entirely in the majors. Perhaps it was being among his cultural ancestors, but Roberge pitched a career high 68 effective relief innings, with a 1.179 WHIP and 3.44 ERA. After an awful spring, Roberge started the 1986 season all the way down in A ball, where the Expos stored him instead of releasing him. When he came back to the majors in April, it was to make an exhibition start in the “Pearson Cup” came between the Expos and Blue Jays. He did eventually make it back for real, but the Expos’ handling of him clearly upset his confidence: He went 0-4 with a 6.28 ERA. And that was it.
As a child, Roberge worked in the family mung bean sprout wholesaling business with his father and brothers. Today, the Curran Company packages all sorts of vegetables and Roberge is one of the company partners. Some of you East Coast readers no doubt have eaten some of these products! 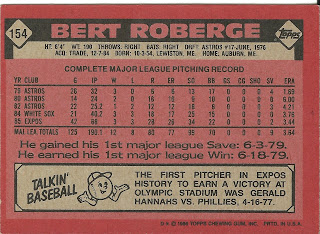 Rear guard: Roberge's first save came against the Expos in relief of #135 Joe Niekro. He retired all 4 batters he faced: Three were on flies to the outfield, and one was a line out, double play ball hit by #85 Tony Perez.
The Expos played at Jarry Park before moving into the domed Olympic Stadium in 1977. Gerald Hannahs only win that year (and last of his career) was the one at Olympic Stadium. He gave up 3 runs in 6 1/3 innings for the win. Hannahs only started 12 games over 4 seasons with the Expos and Dodgers.
Posted by Jets Break Jaws at 9:16 PM