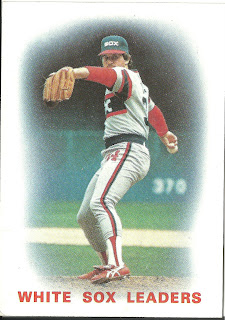 Card thoughts: Never have had an opinion on the White Sox either way. To me, they were always the bland team on the other side of town. Although I really thought old Comiskey was cool. The year shown on this card was a fairly good one of the White Sox, as they were in the pennant race all year, finishing 6 games back of the Royals, in third place.

The player: Richard Dotson went 97-95 with the White Sox with a 4.02 ERA over 10 seasons. I guess Topps counts the debuts of players as the day they were added to the roster, as Doton did not pitch on September 1, 1979. Harold Baines and Britt Burns joined the Sox in 1980 and were with the team the second longest at this point. 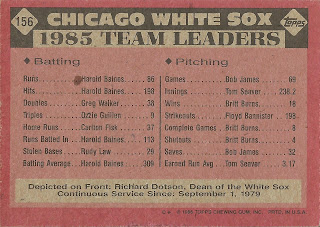 Rear guard: The twin poles the Sox offense revolved around in those days were Harold Baines and Carlton Fisk. Both put up hall of fame type numbers over their careers, but only Fisk has made it in so far. Baines was in the league top ten in batting average (8th), hits (5th), and runs batted in (4th). Walker was tied with George Brett for 5th in doubles, and Fisk's 37 home runs were just 3 behind league leader Darrell Evans.

Seaver, at age 40, was the most durable pitcher, and he led the team in ERA . This would be his last good season. The aforementioned Britt Burns was the best overall pitcher for the White Sox: His 18 wins were 3rd in the league, and he was 2nd in shutouts. No one would remember Bob James as particularly good closer, but he managed to save 32 games, good for 2nd in the league.
Posted by Jets Break Jaws at 11:18 AM