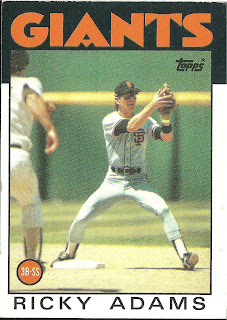 Card thoughts: Adams only had one other card than this one, when he was with the Angels. I don't remember this player or card at all, but it's an excellent shot of Adams, playing shortstop, forcing a Padre at second. Not as dramatic as the #118 Jerry Royster card, but still nice. The game was likely on June 21st, a Friday afternoon game.

The player: Ricky Adams was a star high school infielder who was selected in the first round by the Astros in 1977. But he hit poorly in the minors and was released in 1980 to be picked up by the Angels. Adams began developing some power hitting skills once he got to AA, and was rewarded with a call up to the big club in 1982, where he hit .145 in 8 games. But the Angels infield was tough to crack at that time, with veterans Rod Carew, Doug DeCinces, Tim Foli, and Bobby Grich holding down the positions. Adams came back for the second half of the 1983 season, where he played all over the infield with career highs in games (53) and average (.250). He was out of the majors for a year, then resurfaced with the Giants in the season shown by this card. Adams once again played all over the place, mainly at third and short, but couldn’t hit his weight. This would be the last season he played major league ball.

After his career was over, Adams became a salesman for a cement company. Unfortunately, after a short battle with skin cancer, Adams died last October. His obituary can be found here and here is the site of the Ricky Lee Adams Foundation, which gives money to baseball related youth charities. 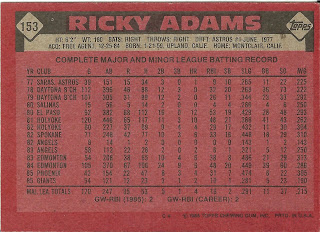 Rear guard: Adams only got 247 at bats in 3 years in the majors. Probably because he could only manage a career .215 average and a .291 slugging percentage. Still, you can see he hit well in the high minors.
Posted by Jets Break Jaws at 10:24 PM