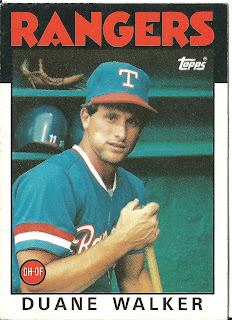 Card fact: This was Duane Walker's last card and first in a Rangers uniform.
Card thoughts: Nice candid of Walker in his natural position, on the bench waiting to pinch hit. There sure is a lot of blue in this picture. And the veins on Walker's on pale hands really stand out for because of it
The player:  Walker was one of those fifth outfielders who pinch hit a lot but never started much in the majors. He started out in the minors as a shortstop and flashed some speed and hit for a decent average, but it never translated to the majors where he only hit .229 in a 5-year career. He did have a good year off the bench in 1984 when had 10 HRs, slugged .528, and hit .292 in 195 at bats. On the year shown on this card, he was shipped to the Rangers in a mid-season deal with pitcher Jeff Russell  for Buddy Bell, who was near the end of his career. Bell would have a couple more good years with the Reds, while Walker would be released at the end of the season and Russell would struggle as a starter for the Rangers for several years until they made him a closer.
After baseball, Walker was a salesman representing many masonry companies. He was the regional sales manager for the Nawkaw Corporation, which sells masonry stains, until 2010. 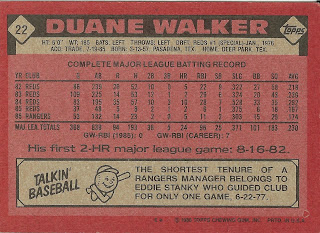 Rear guard: Those two home runs were against Nolan Ryan. Eddie Stanky had done some previous managing in the 60s, but returned to his native Alabama to coach college. After replacing Frank Luchesi as Rangers manager (and winning his debut) he had second thoughts about leaving home and resigned after the game. He was replaced by coach Connie Ryan.
Posted by Jets Break Jaws at 10:03 PM