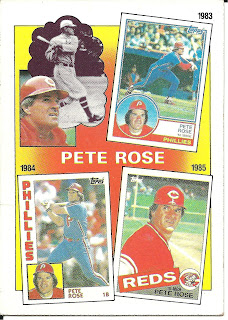 Card fact: This is the last card in this subset. I won't have to talk about Pete Rose for awhile!

Card thoughts: Pete Rose dreaming of Ty Cobb? Pretty cheesy, Topps. I wish I would have started collecting cards in earnest in 1985. I was always excited to be able to trade for these cards as a kid, even if they were a common.

The player: Rose was playing for the record at this point. He was demoted to pinch-hitter by the Phillies in 1983 when his age started to show and his batting average dipped. He was released by the Phillies and signed by the Expos where in a part of a season he hit poorly again. He was traded back to Cincinnati to break the hits record for Tom Lawless, a career backup utility player with 110 career hits (although we was a good leadoff hitter in the minors). The record hit came off Eric Show, whose own tragic story will be alluded to when his card comes up. Interesting note: With further research, apparently Ty Cobb had two less hits. So Rose really broke the record "unofficially" against Reggie Patterson of the Cubs. 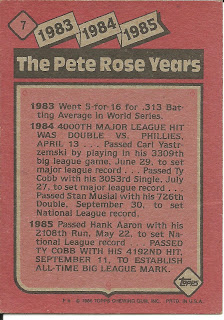 Rear guard: Finally, a world series mention! Maybe because 1983 was such a terrible offensive year for Rose.
Posted by Jets Break Jaws at 6:41 PM