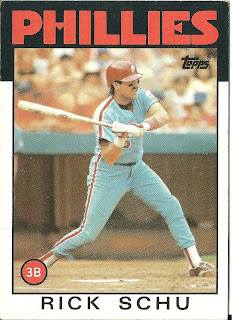 Card thoughts: I really loathe these powder blue "pajama" uniforms of the 80s Phillies. Since when has blue been a Phillie color? I'm guessing Schu is checking his swing here, as that would be a very awkward hitting stance, seeing as how he's out on his front foot.

The player: Rick Schu had the unenviable task of replacing Mike Schmidt at third when the hall-of-famer wanted to save his knees by moving to first. However, the move actually hurt Schmidt's knees more, so the experiment only lasted the year shown by this card. Schu was then reduced to a utility role, and eventually drifted to a number of teams, including the Orioles, the Expos, and the Tigers. His utility as a major league bench player was hampered by the fact that he really only could play third base well.

In 1994, Schu, frustrated that the Phillies weren't giving him another shot after a couple of good seasons at their AAA farm club, played for a couple of years with the Nippon Ham Fighters in Japan. After returning to the States, he played a few more pro seasons before retiring and becoming a hitting coach with the Arizona Diamondbacks (where he succeeded #8 in this set Dwayne Murphy!). He is now a roving hitting instructor in the Nationals minor league system. 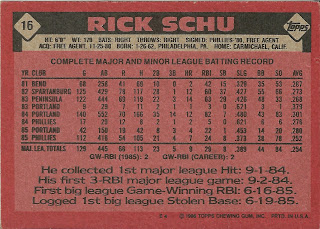