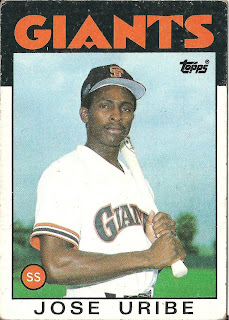 Card fact: This is Jose Uribe's first Topps regular set card. He had a card in the traded series the year before.

Card thoughts: Uribe looks pretty confident for a rookie. There's a kind of nice, smiling easy grace to this picture. Like a yearbook photo.

The player: Jose Uribe, like his fellow rookies Ozzie Guillen and Steve Jeltz, was a tremendous fielder with not much hitting prowess (lifetime average: .241). In this era, teams were often willing to trade a hole in the lineup for steady defense from the "up the middle" guys (today--much less so). Speaking of trades, Uribe was part of a big one before this season, with the Cardinals getting slugger Jack Clark and the Giants getting starting pitcher Dave LaPoint, first baseman David Green, infielder Gary Rajsich (all of whom bombed with the Giants). Uribe  had a good 10 year career with the Giants--6 as the starting shortstop, including during their 1989 pennant winning season. He was very popular with the fans and won the coveted "Willie Mac" award in 1988 for his team spirit. The chant "OO-Ree-Bay" heard so often during the 2010 World Series for Juan Urine (Jose's nephew!) originated with Juan.

Tragically, Jose Uribe died in a late night car crash in his native Dominican Republic in 2006 at the age of 47. 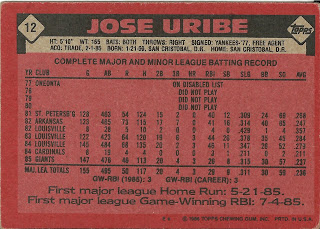 Rear guard: The injury Uribe got after being drafted by the Yankees must have been pretty bad (did he also get homesick?), because he gave up the game for many years afterward. The game-winning RBI note is telling. Apparently, when Chris Berman was at his most obnoxious, he nicknamed Jose "Game-Winning RBI" for reasons unknown.
Posted by Jets Break Jaws at 9:56 PM

Forgive me if you were joking and I just couldn't tell...the nickname was a play on Uribe's name. BTW he was originally known as Jose Gonzalez.