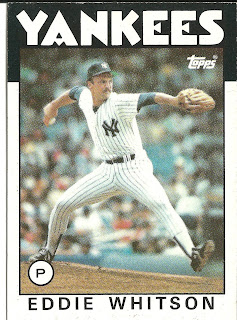 Card fact: This is only the second real "in-action" shot of the set (the first was Pete Rose). Bob Kearney's card was more of an "in-game" shot, as he wasn't really doing anything in the photo.

Card thoughts: This is a great shot of a pitcher at full extension, right about to deliver the ball. By the grip, he looks like he's delivering a curve ball. And seeing how he was treated by the Yankees fans (and this shot was taken at Yankee Stadium) that look on his face is most likely anger, rather than determination.

The player: Whitson was a fairly marginal pitcher who both relieved and started for several teams before a career year in 1984, when he won 14 games for the pennant winning Padres, including a particularly strong game preventing the Padres from getting swept in the NLDS, holding the Cubs to 1 run on 5 hits.

Unfortunately, this season was a blessing and a curse for Whitson. During the Yankees free-agent binge in the mid-80s, Whitson was one of their expensive bombs. He was signed to a five-year deal (with an option for six) for a then high salary of $4.4 million. New York fans hated him after he started 1-6 with his new team. They would send him death threats and verbally abuse him when he pitched at home--so much so, that he refused to let his wife come to home games. He also got in a fight with manager Billy Martin at a hotel bar (how many people have had THAT happen to them!). When Lou Pinella took over as manager the next year, he only pitched him in road games and eventually George Steinbrenner took mercy on him and shipped him back to the Padres. Even after he left the Yanks, they wouldn't let their hatred go. One threatened to blow his brains out if he pitched against the Mets at Shea Stadium and he had to be escorted to the park by the baseball commissioner's security guards.

Despite all this drama, Whitson ended his career with a winning record (126-123) and a decent ERA. He currently volunteers as a high school baseball coach in Dublin, Ohio. 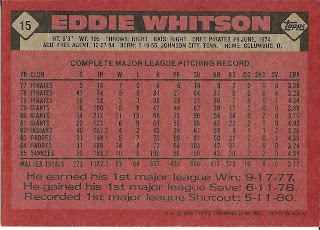 Rear guard:  His first shutout was at Wrigley Field against future Giant Mike Krukow in front of a tiny crowd (for a Sunday) of 15,465. It was quite a game. It was Whitson's first win of the season, after losing his first five in a row. He gave up only 7 hits, walked no one, and even drove in Rennie Stennett with the second Giant run.
Posted by Jets Break Jaws at 7:47 PM