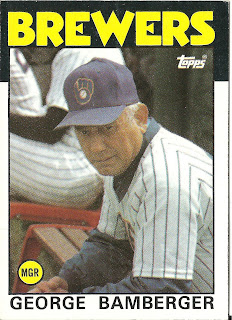 Card fact: Like a lot of managers, George Bamberger was a marginal player. He would have many more cards as a manager (and a coach, in the days they were shown on cards) than as a player.

Card thoughts: This picture was taken during spring training, as the manager is sitting on a folding chair outside the dugout. Kind of an odd shot, as Bamberger is looking sidelong at the camera.

The manager:  Bamberger gained fame by being Earl Weaver's pitching coach in the late 60s and early 70s when the Orioles had the best pitching staff in baseball. This was the second stint for Bamberger as the manager for the Brewers. During his first go-round, he had a 235-180 record from 1978-1980. In 1980, he had a heart attack during spring training and didn't join the team until June 6. However, he couldn't finish the season and coach Bob "Buck" Rodgers, who started the season managing the team also finished the season at the helm. He wasn't done, however, and after two dismal years with the Mets (1982-1983), he came back to manage the Brewers. Unfortunately, even though he had many of the same players as in his first stint (Cecil Cooper, Ben Ogilve, Jim Gantner, Pete Vukovich, Charlie Moore etc), those players were mostly in decline and on the year shown on this card the Brewers lost 90 games. The next year he was fired in September and replaced by Tom Trebelhorn. 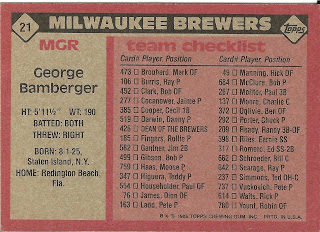 Rear guard: Good coverage of cards from this team, with no glaring omissions. However, Chuck Porter was injured most of the year. Could have replaced him with pitcher Tim Leary (a rookie) or outfielder Doug Loman.
Posted by Jets Break Jaws at 9:00 PM