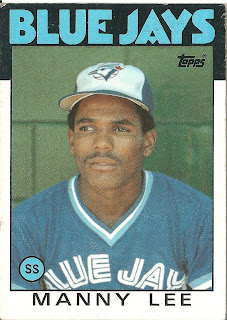 Card thoughts: This candid was obviously taken during spring training (note the cinder block dugout). If this is supposed to show the personality of Mr. Lee, we can only assume he was a bit dull. This Blue Jay uniform is one my favorites from this year.

The player: Lee was a Rule 5 draft for this year, which means the Blue Jays drafted him out of the minors (from the Astros who had obtained him at the end of the previous season from the Mets for Ray Knight) and he had to stay on the major league roster all year or be offered back to his original team. Unusually, Lee was drafted out of the low-A South Atlantic League where his stats were pretty good, but without much power (only 18 out of his 114 hits were for extra bases). He stayed on the club the whole year and was hidden on the bench as late-inning defensive replacement, subbing for error prone infielders Tony Fernandez and Damaso Garcia. He played in 64 games, yet had only 40 at bats!

He would go back to the minors the following year, but eventually became the Jays starting second baseman and shortstop during the franchise's glory years in the late 80s and early 90s. He always was a superb fielder at both positions, but ended up only batting .255 for his career. He also holds the record for most strikeouts without a homer (107). 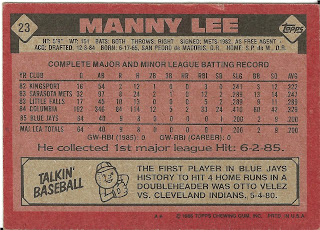